Due to popular request from optician and optometry students, as well as regular glasses and contact lens wearers, I will be doing a comprehensive set of tutorials on how to do back vertex conversions i.e., how to convert a glasses prescription to contact lenses.

I want to stress right off the bat that I do not condone converting your own glasses prescription to contact lenses for the purpose of ordering contact lenses online or elsewhere. This information is strictly for educational purposes and is no meant to be a substitute for professional medical advice. 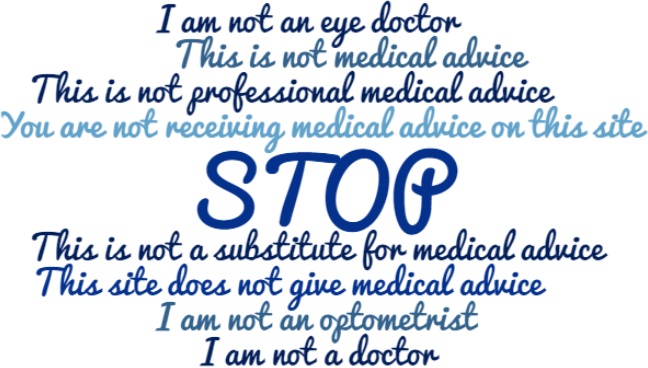 I am not a doctor. The information provided on this page is for general educational purposes only. You are not receiving medical advice or being prescribed contact lenses on this page. Please read Contacts Advice Terms of Use before continuing.

Starting With the Basics

Although for a trained professional, converting a glasses prescription to contact lenses takes only a few seconds, there is actually a lot of knowledge and practice required in order to become proficient at this. In this set of tutorials, I will attempt to impart that knowledge onto you and provide examples for you to practice with.

The first step in understanding how to convert an eyeglass prescription to contact lens works, is understanding how glasses work. Essentially, glasses help us to see by bending (the technical term for this is refracting) light that passes through them. Two things are necessary for glasses to be able to refract light. The lenses must allow light to pass through i.e., they must be transparent, and curved.

If lenses were not curved, what you would essentially have is what we would call a window. Every window in your house is transparent, but flat, so light passes though without being refracted. 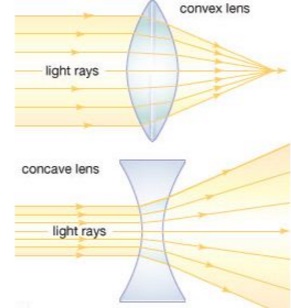 Adding curvatures to lenses can be done in two basic different ways. Lenses can have a convex curvature, or a concave curvature. This gets a little more complicated when we consider both the front and back surfaces of the lens, but for now we will only consider the overall curvature, which can be either convex or concave.

The Amount of Curvature

Lenses can be given any amount curvature, ranging from every so slightly convex or concave, all the way to very steep, round curves.

As a rule of thumb:

Although the radius of curvature is useful in quantifying the curvatures of lenses, it is not a measurement that is really used on a prescription for glasses or contact lenses.

Diopters Instead of Radius of Curvature

Although the radius of curvature is a very accurate way of describing how curved a lens is, it is not a measurement that’s used when writing a prescription for glasses or contact lenses.

Instead, the industry deals in units called Diopters.

The relationship between the radius of curvature and Diopters is quite simple. It is shown in the following formula:

Where n in the formula is the index of refraction of the lens. I’m not going to get into what that means because it’s not overly relevant the topic of converting a glasses prescription to contact lenses. I just wanted to show that the radius of curvature and Diopters are related.

Relationship Between Shape of Your Eye and Your Prescription

A typical prescription for glasses shows 3 numbers per eye. These 3 numbers fall under the categories of ‘Sphere’, ‘Cylinder’ and ‘Axis’. To understand what each of these categories mean, we need to understand the relationship between the shape of the eye and the type of lenses needed in order to see properly. 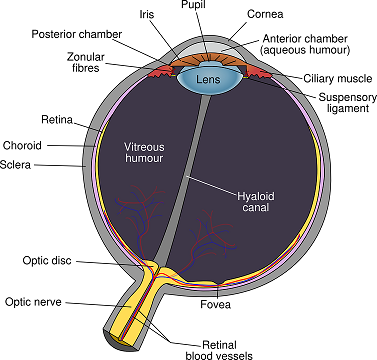 The back of the inside of the eye is lined with a very specialized layer called the retina. The retina is what senses the light entering your eye, determines the wavelength of that light, and creates an electric signal for vision which is carried all the way to your brain. In short, the retina is the part of the eye that produces vision.

For the retina to produce clear vision, the light entering the eye must touch down on the retina in focus. If the light is not in focus when it touches the retina, the resulting vision will be blurry.

As we’ve seen in our discussion about lenses, what focuses light is lenses. The eye utilizes several structures which act as lenses, which in term focus the light onto the retina. The main lenses used by the eye are the cornea, and the crystaline lens. The length of the eye also plays a big role in how the light focuses inside the eye.

For the purpose of understanding the basic principles, we can assume that the cornea is the only lens acting to focus light for the eye, and just ignore the effect of the crystalline lens and the length of the eye now.

The Cornea’s Curvature is Important

If the cornea of the eye has a perfect curvature, the light will refract (bend) just the right amount to arrive at the retina perfectly in focus.

If the cornea is too steep (too curved), it will refract light too much, and the light will come to a focus before it reaches the retina, meaning that by the it arrives at the retina, it will be out of focus. This results in a condition called myopia, or nearsightedness.

If the cornea is too flat (not curved enough, it will not refract the light enough, meaning that by the time it arrives at the retina, the light will still not be in focus. This results in a condition called hyperopia, or farsightedness. 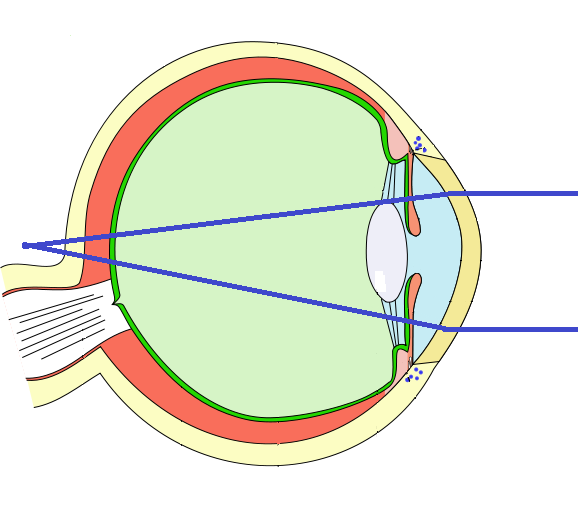 In order to make the vision clear for people who have nearsightedness and farsightedness, we have to adjust the way the light entering the eye gets refracted. This is done by adding additional lenses in front of the eyes which will either increase or decrease the overall amount of refracting power in the visual system.

The Effect of Lenses on the Visual System

Adding convex lenses in front of the eyes adds refracting power to the visual system. They are therefore called plus lenses. They are depicted with a plus sign and a number in Diopters. The higher the number, the higher the curvature of the lens

Adding concave lenses in front of the eyes reduces the refracting power of the visual system. These lenses are therefore called minus lenses. They are depicted with a negative sign and a number in Diopters. The higher the numbers, the higher the curvature of the lens. 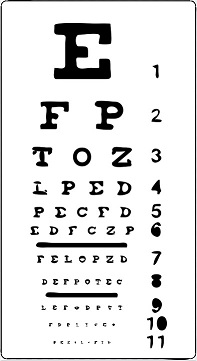 What is the Optometrist Measuring During an Prescription Check?

When you go in for a prescription check, your eye doctor will have you look at a chart while placing different lenses in front of your eyes. What he/she is doing is trying to find the lens with the right amount of curvature (focusing power) to compensate for your cornea’s lack of (or surplus) in curvature.

Once they find the right one, the light entering your eye will be focused precisely on your retina, causing what you see to be nice and clear. They record the power of the lens (in Diopters) and that becomes your prescription.

It’s Actually More Complicated Than That

The process I’ve described so far is actually an oversimplification of everything that happens in a prescription check, but again, I’m simply trying to get across the basic concepts so you understand what is written on your glasses, and how to convert those numbers to contact lenses.

In the past, I have written an article that attempts to explain astigmatism, so I will refer you to that article first. Once you’ve read it, come back here and continue reading.

So as you can see, when the cornea is not completely spherical, it becomes slightly cylindrical in nature which we call ‘toric’. 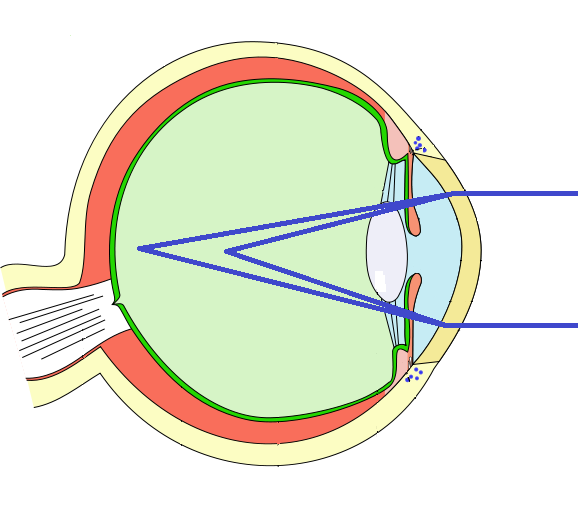 If the cornea is toric, and both curvatures are too steep, meaning that they focus light too much, but one curvature is just a little bit less steep than the other, you would need two different focusing powers in the lens placed in front of that eye in order to make that eye see clearly. Those curvatures could be -5.00 and -6.00.

Remember that these would not be two different lenses. It would be 1 lens made with two different curvatures built into it. Again, these are called toric lenses.

The tricky part is this:

In the example given above, the optometrist would not write down -5.00 and -6.00 on your prescription, even though those are the actual powers that you need in your lens. Instead, they would write -5.00 and -1.00.

By convention, the cylinder is always negative. If you ever see a number in the ‘Cylinder’ column of your prescription with a plus sign in front, it is because your eye doctor is one of very few who like to record prescriptions in ‘positive cylinder format’. If that’s the case for you, read this article.

Let’s look at another example: 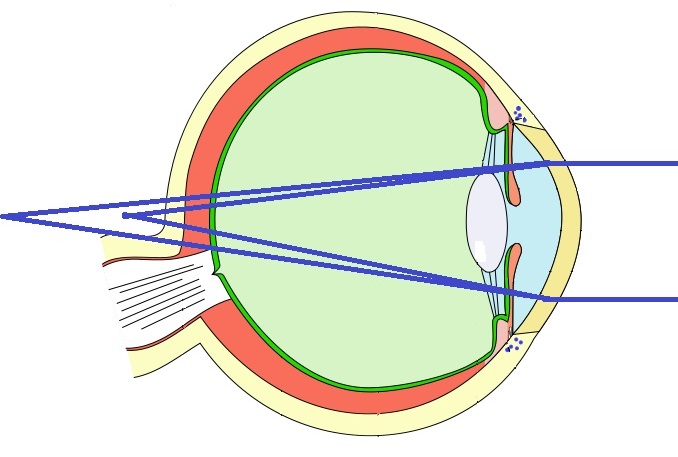 Let’s say the cornea has a toric shape, and both curvatures are too flat for light to focus properly on the retina. When the optometrist places lenses in front of the eyes to try to put the light into focus, he/she finds that one of the curvatures is corrected perfectly with a +3.00 lens, and the other curvatures requires a +5.00 lens.

In this example we see that even though both lens powers required to correct vision are positive, the cylinder is still always negative.

Now that you are familiar with how prescriptions are written, and what the numbers mean, you’re ready to move on to Part 2 of this tutorial. In Part 2 I will explain why a prescription for glasses is not the same as a prescription for contact lenses, and how to move from one to another.